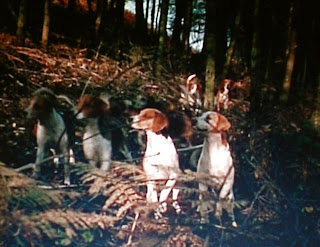 In the 1950 British film, Gone to Earth, a woman tries to save her fox from huntsmen, running desperately from a pack of English Foxhounds with her pet in her arms. But both fox and hounds almost didn't make it into the movie at all.
When the producers set about the daunting task of trying to find not only a tame, but trained, fox for the role of "Foxy," they almost gave up. Turning instead to a Corgi dog to play the part. Yes, a Pembroke Welsh Corgi, with a fox tail attached to its own stub tail. It is extremely fortunate for the integrity of the film that they did at last find the foxes needed as Foxy and the Corgi idea was abandoned.
Then came the problem of the hounds: When the British Field Sports Society learned about the production of Gone To Earth, they made a statement requesting that no master of hounds should allow his pack to appear in it on the grounds that the film was propaganda promoting anti-hunting attitudes. Directors Michael Powell and Emeric Pressburger were furious over the BFSS roadblocks in completing their "work of art," and their troubles were not over.
The American executive producer of Gone to Earth, David Selznick, was so unhappy with the way the film turned out, he sued Powell and Pressburger in an effort to get it changed. Although he lost the case for the British release, he was able to change the film for its US release. And change he did, re-shooting large portions in Hollywood instead of England and cutting out others. Unfortunately Selznick could not be bothered to go through the trouble Powell and Pressburger had to find trained foxes. In the scenes that were redone of the flight across the countryside with the fox in her arms, actress Jennifer Jones carries a stuffed dog instead.
But Powell and Pressburger had the last laugh: In the end they got the fox, got the hounds, and Gone to Earth was a success in the UK.
Pictured: English Foxhounds catch the scent of the fox in a scene from Gone to Earth.
Posted by Reel Dogs at 10:37 PM No comments:

Director Carlo Carlei wanted to adapt Fluke, a novel by James Herbert, into a feature film as soon as he read it. He optioned the rights for $5,000 but it was twelve years before Carlei's dream became a reality. The story of a dog who has been reincarnated and is searching for the family he knew as a man, Fluke was released in 1995.
The first dog to audition for the role was Comet, a Golden Retriever who appeared as the family dog in the TV show Full House. Although Carlei was blown away by Comet's skills, the dog in the novel was a black mixed breed and the search continued. It was only after auditioning over a hundred dogs that Carlei went back to Comet and asked if he could be made to look like a mutt.
Comet's coat was dyed dark and trimmed short. To make sure they had done enough, the producers asked a dog show judge to take a look at Comet. The judge pronounced the dog to be a Golden cross and Comet got the role.
Although animatronic puppets were made to double for him in especially dangerous or difficult scenes, Comet proved to be such an outstanding performer that he hardly ever needed one. Comet can be seen in his normal coat in the 1997 made-for-TV film, My Magic Dog a.k.a. My Ghost Dog.
Discussing Comet's acting abilities, his trainer, Cristie Miele, said, "If ever there was a dog who was a person at one time, it's him."
Pictured: Photo from author's collection; "Fluke" makes a phone call. Copyright MGM, 1995.
You can buy Fluke, easily one of the best dog films ever made, and My Magic Dog through the links below.
Posted by Reel Dogs at 9:26 PM 3 comments:

The Bully as a Good Guy: American Bulldogs in Film 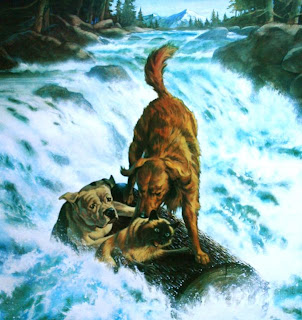 While American Pit Bull Terriers and Staffordshire Bull Terriers have gotten a bad rap in the past few decades (with Hollywood's help), filmmakers have taken a different angle with their cousins, the American Bulldog. Beginning noticeably with Walt Disney's Homeward Bound: The Incredible Journey in 1993, ABs have been increasingly playing the role of family, and more notably children's, companions in such films as The Little Rascals (1994), The Pooch and the Pauper (1999), Cheaper by the Dozen (2004) and its sequel. Though still with some not-so-friendly incarnations such as Wonder Boys (2000), AMs have largely avoided the kind of typecasting that Pits have received.
In Homeward Bound, Chance (played by a dog named Rattler) was not only not the tough guy, but a goofball personality similar to what most people associate with a Golden Retriever. Ironically enough, his composed, wise companion was the Golden. Hollywood can brake the rules just as easily as they can make them.
Pictured: Poster artwork from author's collection; Homeward Bound: The Incredible Journey, featuring Golden Retriever "Shadow", Himalayan Cat "Sassy", and American Bulldog "Chance." Copyright The Walt Disney Company, 1993.
Readers may be interested in some of these films, all featuring American Bulldogs:
Bark (2002)
Best of the Best 3: No Turning Back (1995)
Bingo (1991)
Bubble Boy (2001)
Cheaper by the Dozen (2004)
Cheaper by the Dozen 2 (2005)
The Little Rascals (1994)
Homeward Bound: The Incredible Journey (1993)
Homeward Bound II: Lost in San Francisco (1996)
The Pooch and the Pauper (1999) (Not available on DVD)
Return to Me (2000)
Squanto: A Warrior's Tale (1994)
Unaccompanied Minors (2006)
Wonder Boys (2000)
Posted by Reel Dogs at 8:01 PM No comments: 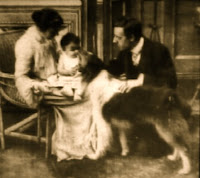 It seems fitting for the first post of this blog, which is dedicated to dogs in film, to be about the first canine movie star; Blair. A male Collie, Blair was the star of Cecil Hepworth's six and a half minute film, Rescued by Rover (1905).
In the film, "Rover," must rescue a baby who has been stolen from her maid by a gypsy. He trails them to an attic hideout, then races home to bring the infant's father (Hepworth) back to save her. Most of the footage is devoted to the dog's brave journey, a brand new concept in film at the time. The public loved it and Rescued by Rover became so popular it had to be remade twice because the original negative degraded to badly.
Hepworth cast his own wife, who also wrote Rescued by Rover, and baby daughter for the film, as well as the family dog, Blair.
Pictured: Blair with the Hepworths in a scene at the end of Rescued by Rover.
Posted by Reel Dogs at 6:58 PM 1 comment: