For the last day of the month, we have an honorable mention: a film about another member of the animal kingdom besides dogs, or a dog film taken from TV episodes or animated rather than live-action.


This month’s honorable mention is French, tiger film, Two Brothers (a.k.a. Deux frères). Filmed in Thailand, Cambodia, and France, Two Brothers was the creation of Jean-Jacques Annaud, known for the sweeping and beautiful animal films The Bear

(1999) (besides his more mainstream works like Seven Years in Tibet

About 30 tigers were called on to play the parts of brothers Songha and Kumal, as well as the other tigers in the film. CGI and puppetry were also employed, though the real thing gets the majority of screen time.

For diehard Reel Dogs fans, a couple of dogs do have brief but notable rolls: a Belgian Malinois and (another Belgian) a Schipperke.

Produced by Pathé, etc.
Posted by Reel Dogs at 3:00 AM No comments:


Based on the classic children’s novel by Sheila Burnford, The Incredible Journey tells the story of three pets, a Labrador Retriever, a Bull Terrier, and a Siamese, who travel hundreds of miles across the Canadian wilderness, hoping to return home to their family.

A massive animal production with little screen time from humans, the film was remade by Disney in 1993 as Homeward Bound: The Incredible Journey.

The animal cast in the original film was managed by one of Hollywood’s most prolific trainers of the 1960s and the go-to trainer for dozens of Disney films, William Koehler. Koehler later wrote a book on his experiences working with the studio: The Wonderful World of Disney Animals 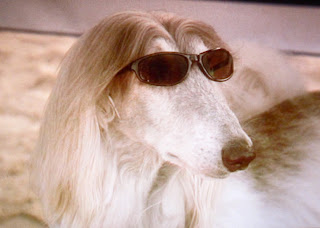 An Afghan Hound plays it cool in Firehouse Dog 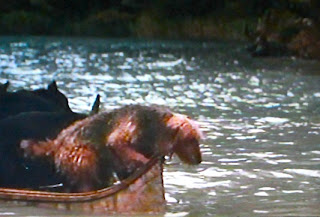 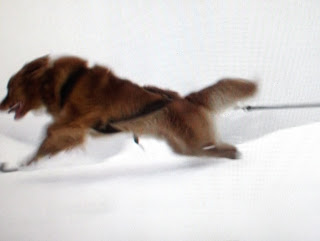 The main sled dog team in Kevin of the North

a.k.a. Chilly Dogs (2001) is led by this Nova Scotia Duck Tolling Retriever.


Charles Eisenmann was best known for his work with London and the TV series The Littlest Hobo, but the Eisenmann educated German Shepherds did far more than one film and show. Among them, The Billion Dollar Hobo.

Eisenmann’s Toro was supposed to play top dog opposite Tim Conway in this fanciful comedy. When Toro needed surgery shortly before filming was to commence, Bo, a far less experienced dog who, for reasons unknown, had never barked in his life, got the part.

At the beginning of the film Bo is assigned by his human to supervise the bumbling Vernon Praiseworthy (Conway) as he rides the rails and tries to prove he's worthy of a large inheritance. Bo soon discovers his new charge is even more thick-headed than most humans, but he perseveres in rescuing Praiseworthy from himself and puts in a stellar performance at the same time.

Besides the handsome Bo, The Billion Dollar Hobo has the added distinction of being one of the very few films to costar a Shar Pei.

This movie is profiled in detail in Wonder Dogs: 101 German Shepherd Dog Films

Produced by International Picture Show Company
Posted by Reel Dogs at 3:00 AM No comments:


The little, black and white mixed breed (Sheltie type) in Our Hospitality steals many scenes from Buster Keaton before mysteriously disappearing midway through the film. You can spot him again toward the end of this silent, now available on a restored DVD edition, but you’ve got to have good eyes to catch him.

Produced by Joseph M. Schenck Productions
Posted by Reel Dogs at 3:00 AM No comments:


A Dog Year got a slow start in life when it ran onto trouble with distribution. Fortunately this surprisingly good dog flick for adults, based on books by Jon Katz, is now readily available on DVD. 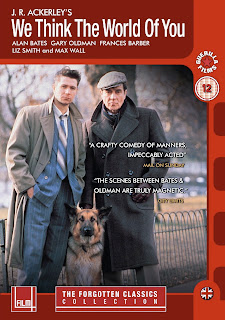 One of the most beautiful canines ever to grace the big screen, Betsy plays “Evie” in this British adaptation of J.R. Ackerley’s classic 1960 novel. Betsy, only eighteen months old at the time of filming, was a long-coated German Shepherd Dog trained at Animals Galore of Surrey, England.

The newest film adaption of an Ackerley book is another German Shepherd Dog film, My Dog Tulip (2009), though this one is animated.

In NTSC format, We Think the World of You is still only available on VHS, though you can get a PAL DVD in the UK.


Canine star Spike appeared in many less-known works than the film he is still best remembered for: Old Yeller (1957). Among them, The Silent Call (1961) and this adaptation of Ouida’s famed story in which he plays Patrasche.

Spike, a rescue dog trained by Frank Weatherwax, also had a son who carried on the legacy by costarring in Island of the Blue Dolphins (1964).

Canine star of Darling Companion, Kasey, a Collie/German Shepherd mix, was found by the Las Vages Humane Society tied to a tree and abandoned with a rope embedded in his neck. Years later, Kasey is a minor celebrity after Darling Companion, with Diane Keaton and Kevin Kline, and the hard work of trainers Sarah Cole and Guin Dill.

Kasey plays Freeway here, but his film career started long before with scenes in Santa Buddies (2009) and The Lincoln Lawyer (2011), as well as a costarring role in Monster Mutt (2011), and numerous TV and advertising appearances. Dyed to match him, another canine TV star, Kuma, doubles as Freeway in scenes like the deer chasing.


In this made-for-TV horror film, director Curtis Harrington hoped to cast a Rottweiler in the starring role. Animal trainer Moe DiSesso read the script and advised him against it: only a German Shepherd Dog, DiSesso said, would have the trained skills needed to pull off the character of "Lucky."

Harrington was smart to listen to the trainer and cast a GSD with a devastating stare and perfect focus for the role of the canine demon sent by Satan to terrorize a typical American family. The canine character is possibly unique in this sub-genre of horror films—he never bites or even tries to attack anyone, but uses telepathy to force his victims to harm themselves.

Produced by Zeitman-Landers-Roberts Productions
Posted by Reel Dogs at 5:00 AM No comments:

Check out these patriotic pooches for President's Day:

A young boy finds a stray and has no idea he's stumbled across the First Dog (2010).

No one believes Max when he gets a tipoff about an upcoming assassination attempt on the president of the United States—because his tip came from a dog. Now it's up to Max to be The Undercover Kid (1996) and save the day. Released on DVD as How I Saved the President.

The Pooch and the Pauper (2000) are a sophisticated presidential pet and a street-smart dog-about-town in this Disney TV movie still not available on DVD.
Posted by Reel Dogs at 3:30 AM No comments:

The Silent Call is believed to be lost, though the novel is now in public domain and easy to find. Only one Strongheart film is commercially available; The Return of Boston Blackie (1927)—his last movie before his premature death.

Both of these movies are profiled in detail in Wonder Dogs: 101 German Shepherd Dog Films (see top right sidebar).

Daily Reel - The Adventures of the Wilderness Family (1975)

The dog features prominently in this tale of a city family leaving it all behind to settle in the wilderness and get back to their roots. He’s an athletic yellow field Labrador Retriever and he’s there to protect his people from marauding wildlife and cheerfully soak up new adventures like any good Lab.

Foreign Film Friday - The Adventures of Milo and Otis (1989)

Also known as Koneko monogatari (“A Kitten’s Story” released in 1986) and The Adventures of Chatran.


This Japanese film became a classic for American and Canadian children (among others) of the 1990s after being re-edited and released by Columbia. With the superb narration of Dudley Moore, ambiguous outdoor settings, and complete lack of any human cast, many North American kids never suspected The Adventures of Milo and Otis wasn’t filmed in their own backyards.

It was, in fact, filmed over four years, using 400,000 feet of film, in Japan with a vast animal cast, including the stars: a “curious cat and a pug-nosed pup.” The original Japanese release was an art film about a cat named Chatran—and not intended for children. But Otis the Pug gets plenty of screen-time in the reworked and shortened English language release.

A flurry of concern arose over the treatment of the animals in Milo and Otis (both in Japan and the U.S.) when it hit theaters. The debate continues today with reliable sources difficult to come by. At worst, the crew was accused of killing many animals involved in the filming, including ten different cats playing Milo. At best, the animals were carefully trained and cared for, but suffered stress at the very least. One can see just by watching the extremely edited U.S. version some traumatic moments, particularly for the cat. That cat was not carefully and lovingly trained to leap off a cliff into the ocean. He was thrown.

A stunning, beautiful, unique film, cherished by a generation, which, sadly, for the sake of its stars, should never have been made.

Produced by Fuji Television Network
Posted by Reel Dogs at 5:30 AM No comments:

You have to overlook the absurd plot to enjoy this one. Not the the part about the talking, matchmaking dog. The part about him needing to go into six-month quarantine if he moves from L.A. to London with his human. (I've taken dogs roundtrip from the the U.S. to UK twice. They don't go into quarantine on either side.) But get past the story itself and you've got one adorable mutt.

"Gabe" is played by the endearing Zoe, an eight and a half pound, ten-inch tall mix from Paws for Effect.

Want to catch one of these stars through your rental list? You won’t find too many Affenpinschers, GWPs, or Porties appearing in your favorite films, but American Foxhounds, Bichons, and Smooths have graced a few big screens, while Old English Sheepdogs have made a sizable mark on Hollywood history from The Shaggy Dog (1959) to a small part in 101 Dalmatians (1996).

Here are some films to check out in honor of your favorite champions:

A German Wirehaired Pointer gets a moment in Dragonheart (1996), but don’t blink! You’ll miss him.

The Bichon Frise can be seen now and then in a film, but due to the wildly varied haircuts and brief scenes, it can be hard to tell if what you’re seeing is really a Bichon, or a Poodle, or … maybe just a plush toy?

The Smooth Fox Terrier has no hair to hide him, though a scene on the couch in A Single Man (2009) does make the two black-headed Smooths appear headless. At least they know that angle isn’t making them look fat.

But the big winner in tonight’s lineup is the Old English Sheepdog. You can snag glimpses of him in such films as Cats and Dogs (2001) and Garfield (2004), but there’s no need to strain your eyes for this breed. He has many larger than life roles (literally in Digby, the Biggest Dog in the World (1973)) with no squinting necessary.

In 1987 Walt Disney added a TV special from the Wonderful World of Disney show to the Shaggy Dog series with The Return of the Shaggy Dog. Also—and well-worth the effort of finding them—two of the most memorable Old English film roles are immortalized in other Wonderful World of Disney TV movies: The 101 Problems of Hercules (1966), in which “Boomer” is a sheep herding hero along with his pals “Lady” and “Hercules” (a Border Collie and Kuvasz), and Three on the Run (1978) where an Old English fills a role you won’t see him take in any other film; wheel dog in a sled team.

If you know more films with these breeds, please leave a comment!
Posted by Reel Dogs at 12:53 AM No comments: