A German Shepherd Dog says goodbye in
My Own Private Idaho (1991)
Posted by Reel Dogs at 7:02 PM No comments:

After Thomas is a made-for-TV film that first aired in the UK on Boxing Day, 2006. I was lucky enough to see After Thomas as I was in England at the time. Had I known it would be so difficult to see it again, I would have taken more notes.
Thomas is a Golden Retriever, named for Thomas the Tank Engine by Kyle (Andrew Byrne), a little boy with autism. For years, Kyle's family fights a desperate battle with Kyle's intense panic attacks and unpredictable behavior in public as well as the home, until a Golden puppy changes all their lives.
What makes After Thomas so poignant and memorable is the way the film was made; although it is based on a true story, it could easily have become cute and childish, too Disney in other words. But it's not. Instead it's raw, heartfelt, and very sad. Yet the saddest thing about After Thomas is that, years later, it is still not available on DVD for NTSC players. And if you want a PAL version, it's going to cost you.
If anyone out there knows where to get an NTSC DVD of After Thomas, I'd love to hear from you.
Posted by Reel Dogs at 4:58 PM No comments:

These close-ups of canine portraits done for different film posters of the 1940s demonstrate a few of the extraordinary animal paintings created for movie advertisements of the time. They show a dog sled team in Girl from God's Country (1940), a German Shepherd Dog in Danny Boy (1946), a Border Collie in Bob, Son of Battle (1947), and a mixed breed fighting with a mountain lion in Shaggy (1949). 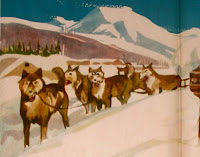