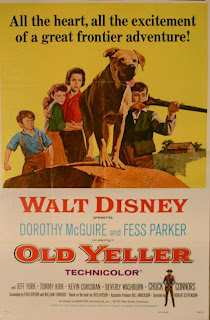 One of the most famous dog movies ever also featured one of the most famous rescue dogs ever. Spike, a huge Labrador Retriever/Mastiff mix, was adopted by Frank Weatherwax (trainer of Lassie) from the Van Nuys Animal Shelter in California for $3.00.
After his first film, Old Yeller (1957), Spike appeared on The Mickey Mouse Club with his costar Kevin Corcoran. He went on to star in two more features, A Dog of Flanders (1959) and The Silent Call (1961), and appear in other films and TV shows including The Westerner (1960).
His legacy lives on today as the poster dog of one of the best known dog novels of all time.
Old Yeller and A Dog of Flanders are both available on DVD. The Silent Call has never been released on either VHS or DVD. 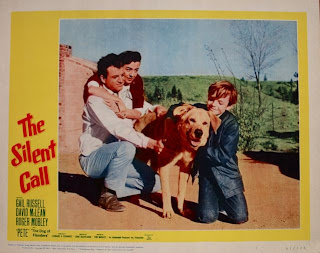 How'd They Do That?: Man's Best Friend

In the 1993 film Man's Best Friend the starring Tibetan Mastiff has some unusual stunts to perform: "Max," a vicious cyberdog on a bloodthirsty rampage, climbs a tree, swallows a cat, shreds a bicycle tire, smashes through a door, jumps onto and over cars, and takes more than a few hits from his human enemies.
These complex scenes were broken down into cuts and trained dogs and tailor-made props were used to complete many of the effects. When Max climbs a tree, the dog was actually crawling across a horizontal log and the image was later manipulated. When he finds himself facing down a man with a shovel, and later a boy with baseball bat, both props were made of rubber.
In a later scene, Max races down the street and leaps onto the roof of a moving car. To achieve the look of the vehicle in motion, a car was being moved on a flatbed truck. The dog jumped from the a platform onto the padded roof of the car.
Clint Rowe and his team, of White Fang and Turner & Hooch fame, trained the Tibetan Mastiffs for Man's Best Friend.
Posted by Reel Dogs at 4:02 PM No comments: 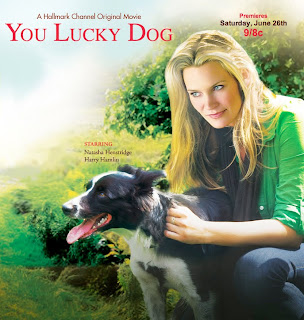 After the theatrical release this month of Marmaduke, there's another dog movie on its way: You Lucky Dog (already released in Canada under the title Family Gathering) is a Hallmark Channel original movie airing on Saturday, June 26, 9/8c on the Hallmark Channel.
The story follows a New York fashion designer (Natasha Henstridge) returning home to the farm after her mother dies. She adopts a Border Collie from a shelter and brings the dog, Lucky, home to her brother (Harry Hamlin) to help with his growing sheep flock. Their father (Lawrence Dane) disapproves of the dog, who used to belong to an old rival. But, like any good movie dog, Lucky turns out to be the whole family's best friend.
After many years without releasing a dog film, Hallmark seems to have discovered new inspiration with last year's A Dog Named Christmas, and now You Lucky Dog (which is also the title of a Disney TV film from 1998). Don't miss it on June 26th!
Check out the trailer below:
Posted by Reel Dogs at 6:09 PM No comments:

Double trouble: This Beauceron duo is working
for the bad guy in Moonraker (1979).

Double time: Golden Retrievers in search of
for their pups in Air Buddies (2006).
Posted by Reel Dogs at 7:38 PM 1 comment: