In honor of Halloween, we're turning our attention for a moment to those reel dogs who act undercover: whether dyed or powdered or clipped or costumed, many movie dogs have to dress-up for their close-up.
The reason can be anything from getting a dog to look wounded, to matching one dog to another whom he or she is doubling for, to getting a young dog to look old, to making a purebred look like a mixed breed. The Parson Russell Terrier in Son of the Mask

(2005) was a white dog who had makeup patches added to make him look more interesting. The radioactive killer in Atomic Dog

(1998) was a white German Shepherd Dog with black makeup to give him an unusual appearance. Another dog who was changed from purebred to mix through dye and a haircut was the Golden Retriever in Fluke

(1995). The German Shepherd who doubled for the main dog in Ace of Hearts

(2008) was a sable, dyed to play a black and tan.
Some of the most extraordinary makeup jobs seen on film dogs are in the cyber-dog movies like Man's Best Friend

(2004). The DVD for the latter includes a featurette showing some of the extensive makeup effects used for the dog in the film. Some other horror dog films to include lots of makeup are The Pack 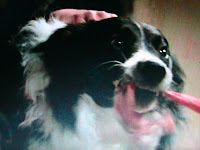 Border Terrier waits for lunch in
Mitt liv som hund a.k.a. My Life as a Dog 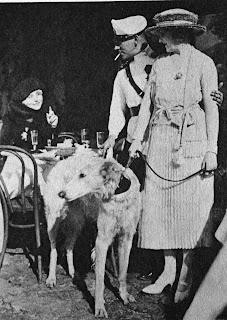